The only AV showroom indicator at the entrance of Encore’s facility is an is a 10-inch Crestron touchpanel on the wall adjacent to the front door that serves as “global control” for the showroom, as well as a sleek backlit company logo made with wavy acrylic and LEDs. Ian Williams, president of Sterling, VA-based Encore Custom Audio Video, knew that the three-year lease would be expiring soon on his showroom facility. He dreamed of moving to a bigger and better space, but did not want to borrow from a bank or add an investor to pay for the project. For most integrators, the build-out costs of transforming a traditional commercial office into a high-end AV showroom, debt-free, would have been impossible. But Williams made it happen, thanks to the unique talents of his five-man crew, which has a Class A state contractor’s license, enabling it to manage projects in any dollar amount, as well as an in-house, full-time carpenter.

“All of my guys are well versed not only in AV but construction builds, as well,” Williams said.

Within Encore’s new facility is a design room with an architect’s table and metal stools, and shelving with all of the company’s design samples, including exotic woods, more than 40 granite samples, leather and suede options, and Crestron window shade samples. To find the best real estate deal and to afford the move, he started looking for office space earlier than usual. He then projected his budget and began saving much of what his company earned for a specific period of time. He knew that a lot of his current showroom’s equipment could be reused in the new property, but he wanted a completely new look and feel to the space that he would begin renting soon.

His patience paid off when he found a bargain on a three-year lease for double the square footage of his current space, but there were no leasing provisions to help convert the space into a showroom.

Encore’s Dolby Atmos demo theater, with integrated inlaid tile on the ceiling and side and back walls, features a 123-inch, 2.35:1 Screen Innovations Gamma 4K Maestro projection screen fed by Digital Projection’s LED 1000 projector with anamorphic lens. The inclusion of Cineak chairs round out the high-level reference-room quality of the room. But the most important investment may have been the acoustics. As soon as the Encore team returned from CEDIA EXPO last fall, it spent the next 10 weeks working on the showroom, while also working on some strategically selected AV jobs.

“We had some less-complex projects, but jobs we could still offer absolute attention to,” Williams said. “This enabled us to balance the needs of both our clients and our new facility. So literally for 10 weeks there were anywhere from three to five guys here building out the 4,000-square-foot space: knocking out walls, putting up walls, adding crown molding, building baseboards, doors, floors, changing out fluorescent lights with residential lighting. You name it, we did it here.”

Costs were further kept in check by leveraging partnerships with various industry vendors. Crestron, Savant, and Pro Audio Technologies were especially helpful,” Williams said. “We were able to save thousands between our vendor relationships and being able to do the construction work in-house.”

The centerpiece for Encore’s new facility is one of the first full-scale Dolby Atmos home theater demo theaters in the Mid-Atlantic region of the U.S. He and his crew had experienced Atmos at CEDIA EXPO, and once Hollywood signaled its commitment to the new surround sound format with Blu-ray movie releases, his company felt comfortable promoting it as well. They developed a relationship with Pro Audio Technology for the necessary DSP-programmed amplifiers and speakers, and hired Sam Cavitt and Ryan Brown from Media Environment Designs to engineer the acoustics and speaker placement for the Atmos demo room. “Having used MED on several other award-winning projects, we knew the end result was going to be nothing short of fantastic, and it was!” Williams exclaimed.

After viewing its first feature film in the new theater, the design team knew that its hard work had paid off, with a truly immersive cinematic experience. “I’ve been doing this for almost 20 years and have heard lots of audio systems. This thing is incredible,” Williams said. “We have the Michael Jackson This Is It concert-making documentary on our Kaleidescape, and when you put on “Thriller,” you think you’re sitting there at the Michael Jackson concert.”

The room, with integrated inlaid tile on the ceiling and side and back walls, features a 123-inch, 2.35:1 Screen Innovations Gamma 4K Maestro projection screen fed by Digital Projection’s LED 1000 projector with anamorphic lens. Cineak theater seating rounds out the high-level referenceroom quality of the room, but one of the most important features of the room was the investment into proper acoustical treatments.

“Obviously having put a lot of time and effort into this room, it would have been a completely different environment if we hadn’t had this space engineered correctly,” Williams acknowledged. “It would sound great, yes; but when you design a room correctly and tune it correctly, it’s going to make all the difference in the world.”

Larry Reagan, VP of sales for Pro Audio Technology, helped Encore define how it wanted its speakers tuned, and Sam Cavitt’s MED team sorted out the rest of the audio layout.

“It’s as flat a response as I’ve ever seen in any room we’ve ever done, in terms of optimization,” Williams said. “And it will play 105 DB, no problem, all day long.”

Typically, Encore hires MED for acoustical analysis on projects budgeted for more than $75,000. On most projects exceeding $100,000, MED is asked to provide video imagery calibration, as well.

Another Encore media room showcases VisionArt that rolls up over a flat-panel TV and a large Middle Atlantic Products rack that pivots around to showcase Encore’s wiring skills. All of that extra design and calibration effort seems to have paid off for Encore, with the company already having sold two Pro Audio Technology Atmos theaters as a result of Dolby Atmos demos in the new showroom.

As for the rest of the new facility, Williams pointed out that his showroom is definitely not meant to look like a retail store, but more like a design or production center that’s warm and inviting to clients, potential clients, and trade partners.

“I wanted this to be a very homey and relaxed environment, and more of an experience for clients than our other showroom,” Williams explained. “When you walk in here, you would not know that you were in an audio/video integration firm.”

The only possible indication is a 10-inch Crestron touchpanel on the wall adjacent to the front door that serves as “global control” for the showroom, as well as a sleek backlit company logo made with wavy acrylic and LEDs. More prominent, however, is a Pottery Barn-like wall built from reclaimed barn hardwood, layered with a 3×4-foot wood cutoff of an American flag.

The Encore Custom Audio Video team, celebrating its wins at CEDIA EXPO 2014, are Danny Remington, master carpenter; Michael Snell, installer/technician; Ian Williams, president/ owner; Chris Kline, master technician/programmer; and Michael Barbato, project manager. To the left of the entry is a design center with an architect’s table and metal stools, and shelving with all of the company’s design samples, including exotic woods, more than 40 granite samples,

leather and suede options, and Crestron window shade samples. That room also features inceiling speakers and a flat-panel TV connected to the office’s video distribution system, and Apple AirPlay, for collaborating with clients, designers, and builders.

Another media room showcases VisionArt that rolls up over a flat-panel TV and a large Middle Atlantic Products rack that pivots around to showcase Encore’s wiring skills.

Near the entrance to Encore’s warehouse, there’s a workstation that has the look and feel of a high-end car dealership’s service center, including a stainless steel tool chest for the Encore engineering department, articulating mounted TVs, and four-zone distributed audio system. The engineering department can test all of its racks there before they are shrink-wrapped and placed on company vans.

The combined design, construction, and integration skills of Encore’s crew have enabled the company to take a holistic approach on other jobs, as well.

“We have a meeting every Monday morning, and I stress every time that yes, you’re a programmer, or yes, you’re an installer, but everybody here does everything,” Williams said. “I was visiting a jobsite the other day as I normally do, and started chipping in where help was needed. When it is crunch time, it’s got to get done, and if you can help, you just get in there and do what is best for the project and/or client. The guys understand that, and that kind of spirit is really how this all came together.” 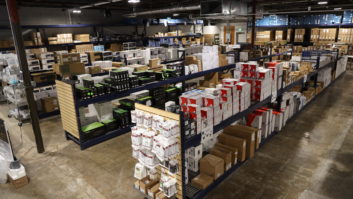 The Art and Science of Power Quality