With the release of the new iPad Air and iPhone 12, I was talking to Mark about how the design of the iOS devices has gone a little retro with he squared-off look, whereas the new Crestron 70 series touch panels have continued to push the sleeker, more streamlined aesthetic. That got us to talking about touch panels in general.

Keep in mind that Mark and I have very different businesses. Home Theater Advisors’ (Mark’s company) clientele, while all in New York City, tends toward the middle-market in terms of projects, ranging from $10,000 to $50,000 for the meat-and-potatoes work. That typically includes three-to-four TVs, four-to-six zones of audio, often some smart lighting, and always a professional-grade network. They rarely incorporate a video matrix because the project size is typically smaller and the budget doesn’t allow for it. The typical home is a 1500-3000 square foot apartment.

My company, The Source Home Theater, skews to a much more luxury market. Our jobs range from $30,000 on the low end, up to $250,000 and more. There are typically four-to-eight video zones, ten or more audio zones, lighting control, and automated shading.  We always incorporate Crestron NVX AV over IP, even if just one or two zones of video. Much of the reason for the project size discrepancy is the fact that we work mostly on townhouses in New York City and large suburban homes, so there is just more square footage to cover.

Aside from video matrix, the product category we differ on the most is touch panels. Home Theater Advisors rarely includes touch panels in their projects. They tend to be limited to the larger jobs with robust lighting control, automated shades, and a client who will likely use them for music control as well. There are typically only a couple installed — one at the front entry and one the kitchen — with the occasional addition to the master bedroom.

Some of the reasons Mark is a little hesitant to sell more touch panels is that he has gotten pushback from clients on the price compared to an iPad; they become obsolete faster than anything else in the project, typically; and he has experienced situations where multiple legacy touch panels have restricted system upgrades due to compatibility with news OS’s of the control system and the expense associated with replacing four or more of them is just too much for the client to swallow. Then the client is disappointed in their system over time because it does not have the most current features. Yes, the last point is self-inflicted by the client, but all they care about is that their friend/uncle/cousin’s aunt’s brother-in-law has something cooler for way less money. Currently Home Theater Advisors incorporates a lot of the smart home functionality on lighting keypads. However, Mark fully admits this strategy requires extensive programming, especially for music and LED feedback, and too many buttons confuses and intimidates clients.

On the other hand, multiple touch panels are a part of every sale we make at The Source Home Theater. At a minimum, there are ones at the entry door, back door, master bedroom, and kitchen. We often also have them placed in the playroom/basement, master bathroom (for music, typically), and discreetly in the living room. Our clients use them extensively for lighting, shading, HVAC, security, and audio control, as well as many shortcuts we program for macros like goodnight, good-bye, welcome home, etc. We often find that the client’s favorite interface is the touch panel.

I love touch panels because they offer such quick access to everything a client needs to do. The touch panel is always active and ready to go, unlike a mobile app, where the device needs to be unlocked, the app opened, the app needs to connect to the system, and then you can start using it. With the proximity sensors embedded in today’s touch panels, they are often ready to go before you are even in range to touch them. My rationale for a touch panel when talking to a client is not that different than the rationale for a handheld remote in a video zone: I do not want to have to through all of the steps and time to open a mobile app just to adjust a shade, activate a lighting scene, or change the temperature. I also do not want to be distracted by some random text or voicemail on my phone that I would not have otherwise seen if I wasn’t taking my phone out to control my home. The worst thing is when I am spending some quality time with my family and want to make an adjustment to the house, but then see a text or message from a client and I am then distracted from those most important to me. The same thing happens to our clients.

Clearly, the two of us have spent some time talking about this topic over the past couple of days. We talked extensively about his concerns and about my reasons for including multiple touch panels on every job. I will admit that I hadn’t thought too deeply about the issues around upgradability, as it really has not been an issue for me yet. Mark, on the other hand, felt the analogy to a handheld remote really resonated with him. That reason — and the reduction in complexity and cost with multiple keypads — may help offset the cost of a touch panel or two on every project.

How about you? Are you a touch panel evangelist or do you shy away from them? We’d love to hear from you! Running a Better Business in Times of Inventory Uncertainty Is the Small Fill-In Project Dying? 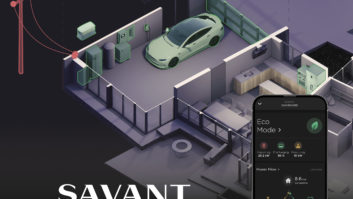