KEF has announced the global availability of KEF Blade, which the company is calling the the world’s first Single Apparent Source loudspeaker.

The result of five years of R&D efforts, according to KEF, the Blade will be branded as the first product for the company’s 50th anniversary, which KEF celebrates this year.

KEF Blade is the evolution of KEF’s Concept Blade, which was first shown in 2009. Single Apparent Source technology ensures the entire frequency range radiates from one point in space, creating a sound picture that is nearly indistinguishable from a live performance, KEF says. KEF Blade is housed in a glass-reinforced composite cabinet.

“KEF Blade is truly a ground-breaking revolution in loudspeakers design and sound performance,” said Alec Chanin, president of KEF America. “KEF’s unique Single Apparent Source technology allows KEF Blade to deliver sound from a single point source, giving listeners a one-of-a-kind experience that puts them right into the recording studio. From its outstanding sound performance, to its modern stylish design, KEF Blade is the perfect representation of 50 years of engineering excellence and innovation.”

KEF’s Single Apparent Source ensures that individual driver sections – for bass (LF), midrange (MF) and treble (HF) – of a multi-way loudspeaker work together and produce sound-fields that appear to come from the same point and place, which is especially important at the crossover frequencies where the sound output switches between drivers. The Single Apparent Source is an extension of the new, fully pistonic KEF Uni-Q® MF/HF array, and includes the bass drivers for the first time.

Four 9-inch (22.5 cm), newly developed bass drivers deliver the KEF Blade’s distortion-free low frequency response. To configuration is engineered to let the forces of each moving cone cancel each other out by arranging them in opposed, symmetrical pairs. Due to the force produced by the bass drivers, the rear magnets are bonded directly to each other, side firing so their acoustic center coincides with those of the all-new, latest generation Uni-Q midrange driver and tweeter.

KEF Blade incorporates many of the core aspects of the Concept Blade, which was created through a partnership with KEF and Eric Chan of New York based ECCO Design. The design team was challenged to effectively accommodate KEF’s Single Apparent Source configuration without making the cabinet’s upper portion look too bulky. The solution was to produce a cabinet that grows gradually from the base, expands in the middle then tapers to the top. The cabinet’s graceful curves are enclosed in an exceptionally rigid and heavy cabinet made from polished glass reinforced composite. The parabolic curvature of the enclosure increases cabinet rigidity even further and the drivers are fully decoupled, meaning that sound is only generated from driver movement and not from the cabinet.

KEF Blade is available in a standard Gloss White and Gloss Black, but will also be available in an array of custom colors including Garnet, Sapphire, Grigio, Racing Red, Racing Blue, Pale Gold, Orange Sorbet, Graphite, Stardust, Lemon Sorbet, Lime Sorbet and Snow White with a MSRP of $29,999. 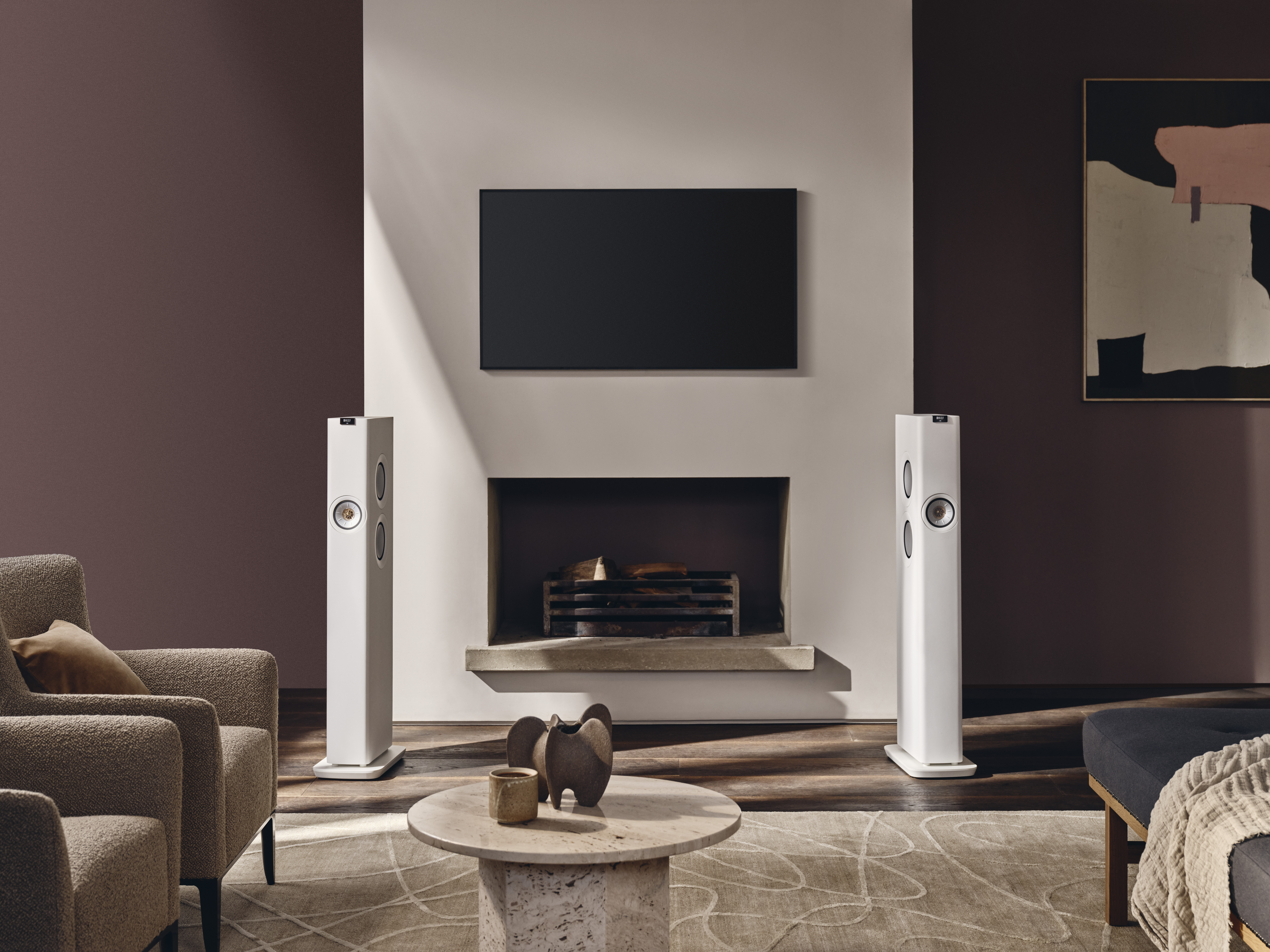